CYC presented each of the Sweet Tooth Hotel Intangible artists with the opportunity to write their own guest post for the CYC blog. We told them they could write a post over any topic related to their install or CYC AIR experience. The following blog post is written by Sally Ackerman! Sally is a musician and yarn artist based in Dallas. She is the founder of the Dallas Yarn Bombers - a local group that comes together to work on large yarn installations. As a team these dedicated and talented knitters went forth to beautify and colorize our urban landscape.

“Sow a thought, reap an action; sow an action, reap a habit; sow a habit, reap a character; sow a character, reap a destiny.” ― Stephen Covey

Recently, I was cleaning out a cupboard and found a tablet from 2006. I had been reading a book about achieving your dreams. The book suggested writing down a list of your dreams — no matter how crazy or far fetched. Just write them down.

I picked up the tablet 14 years later, and my eyes zoomed in on these words.

I’d like to say that from the moment I wrote those words, I worked diligently to make my dream happen. I did not. I put the tablet aside. It got covered up with other junk. I moved on.

In the early days (2011) of the International Yarn Bomb Movement, I decided to place a few ‘street bombs’ in and around Dallas. I had seen some pictures of yarn bombing, but no one in Dallas was doing it. I thought, “What could be more fun and outrageous than skirts on street signs and sweaters on fire hydrants?” 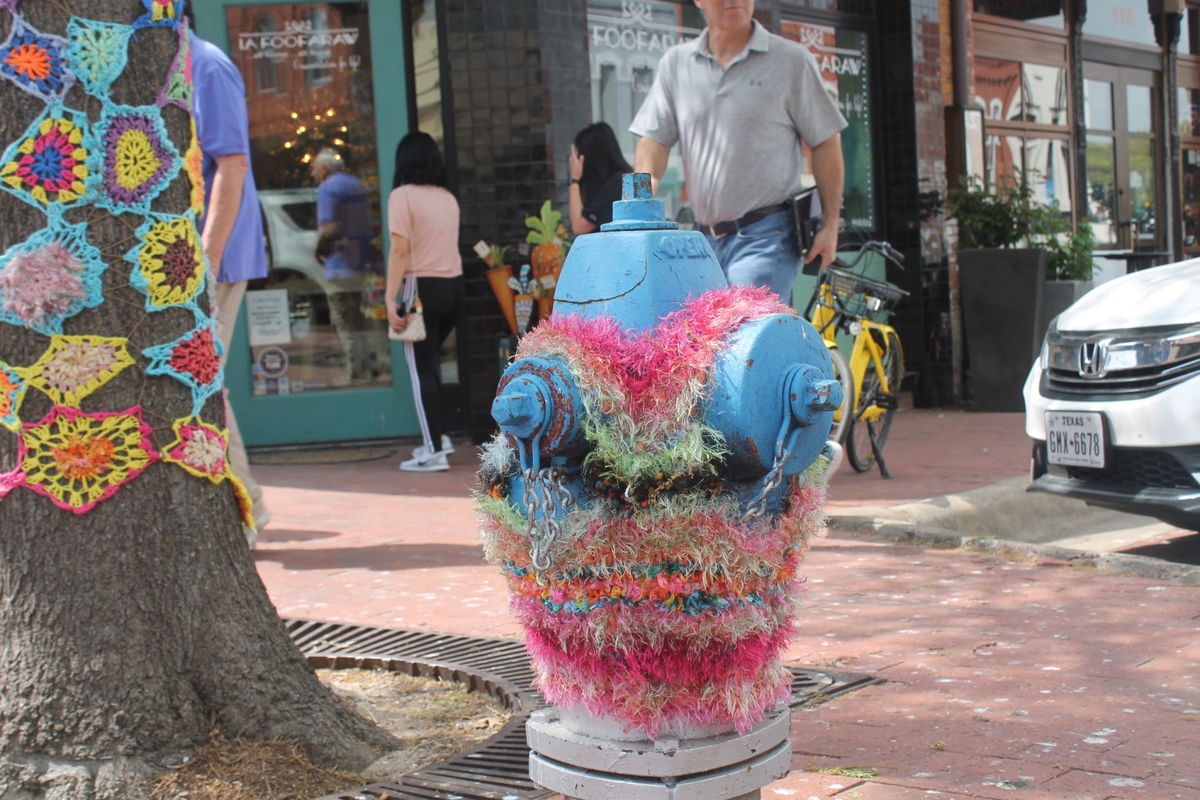 I made 10 yarn bombs and went around to my targeted locations and sewed them on. My husband drove me, in case I got arrested. We literally had no idea what would happen.

I didn’t go to jail, but the mayor promptly ordered Code Compliance to ‘cut down the yarn’. Controversy and notoriety followed, and my journey as an artist began.

It wasn’t long before a friend, who owned a local yarn shop, and I were approached by the Winspear Opera House to yarn bomb their grounds for the Broadway production of HAIR.

It was an enormous undertaking. We were, quite frankly, intimidated by the size of the project. In the end, we decided that if we turned down a chance like this, it most likely would never come again. So, we organized a group of 70 knit and crochet volunteers, called ourselves the Dallas Yarn Bombers, and brought peace, love, and yarn to our first large outdoor environment. 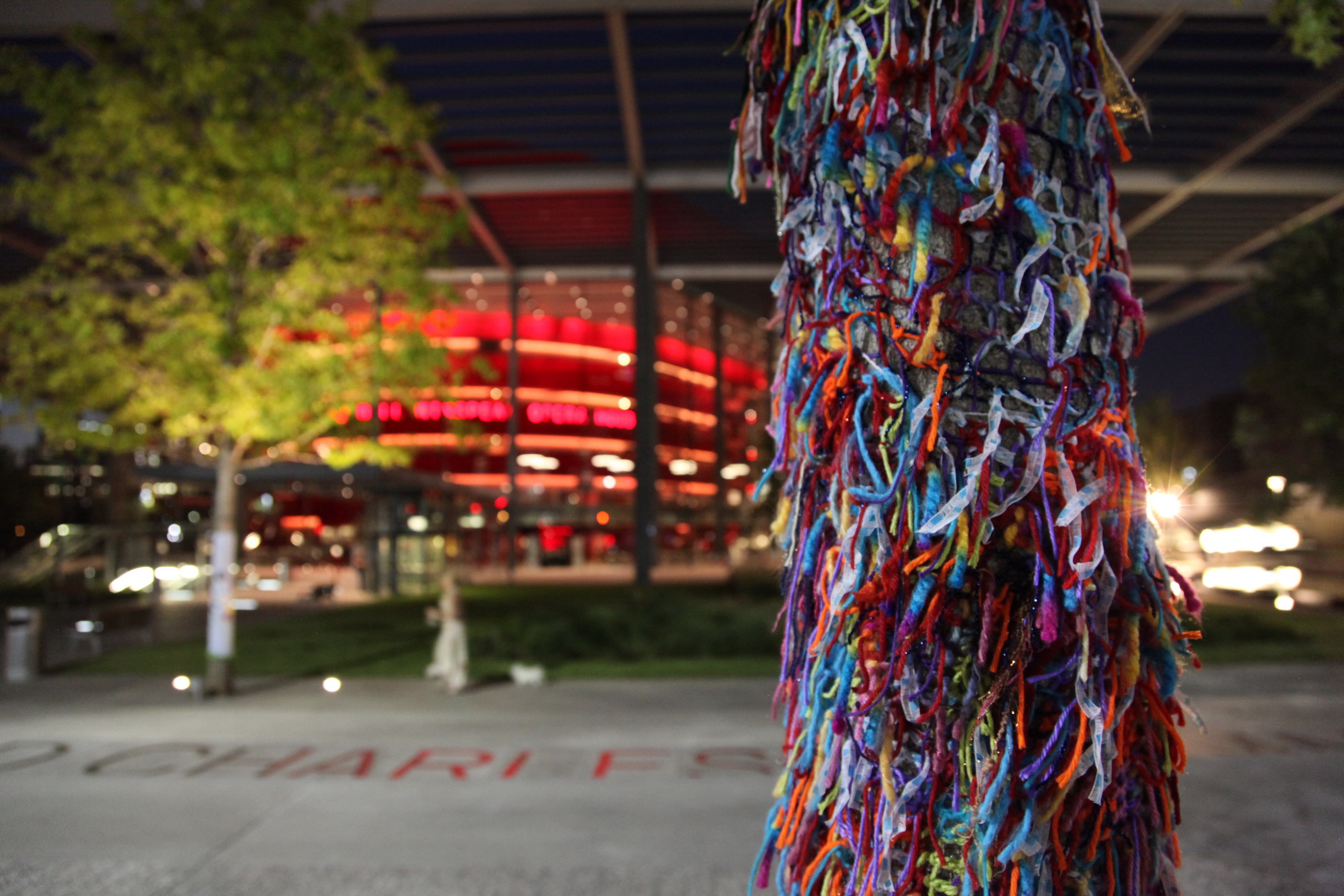 With the Dallas Yarn Bombers or on my own, I’ve installed dozens of large yarn bombings to beautify and colorize our urban landscape. I’ve been invited to exhibit in art galleries and back alleys. I’ve welcomed every opportunity.

I do it because I love it! It brings me pure joy to see the surprise and astonishment on the faces of people passing by. I find delight in the friendships I have forged with the talented artists of the Dallas Yarn Bombers. My passion and my challenge is to put as much yarn love out into the world as I can, as fast as I can.

Then, one day it happened. We were actually commissioned by the City of Dallas to turn parking meters into big, funky yarn flowers.  Somehow, we had managed to win ‘the establishment’ over. 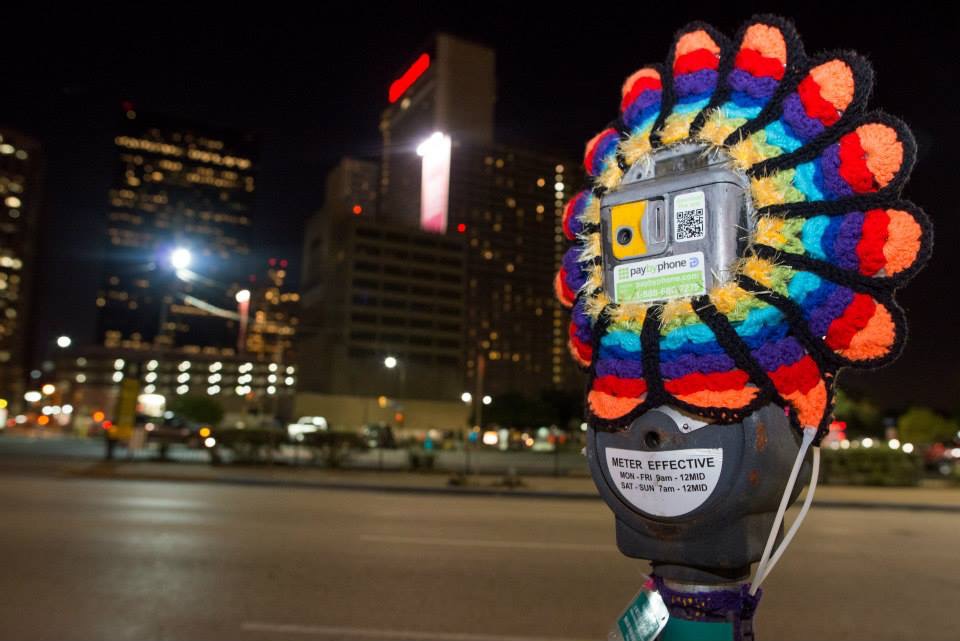 I was honored when Sweet Tooth Hotel approached me about yarning the hallway space for Intangible: A Fiber Fairy Tale. We talked about making my space warm, inviting, and mystical — a place where exotic things could be found. We came up with the idea of a garden tunnel passage with over-sized insects lurking about. I thought it would be beautiful to ‘landscape’ the tunnel using life-sized crochet and knitted flowers and vines. I wanted viewers to feel like they are entering into an entire world of mystical yarn enchantment. And so, "Enchanted Passage" was born. 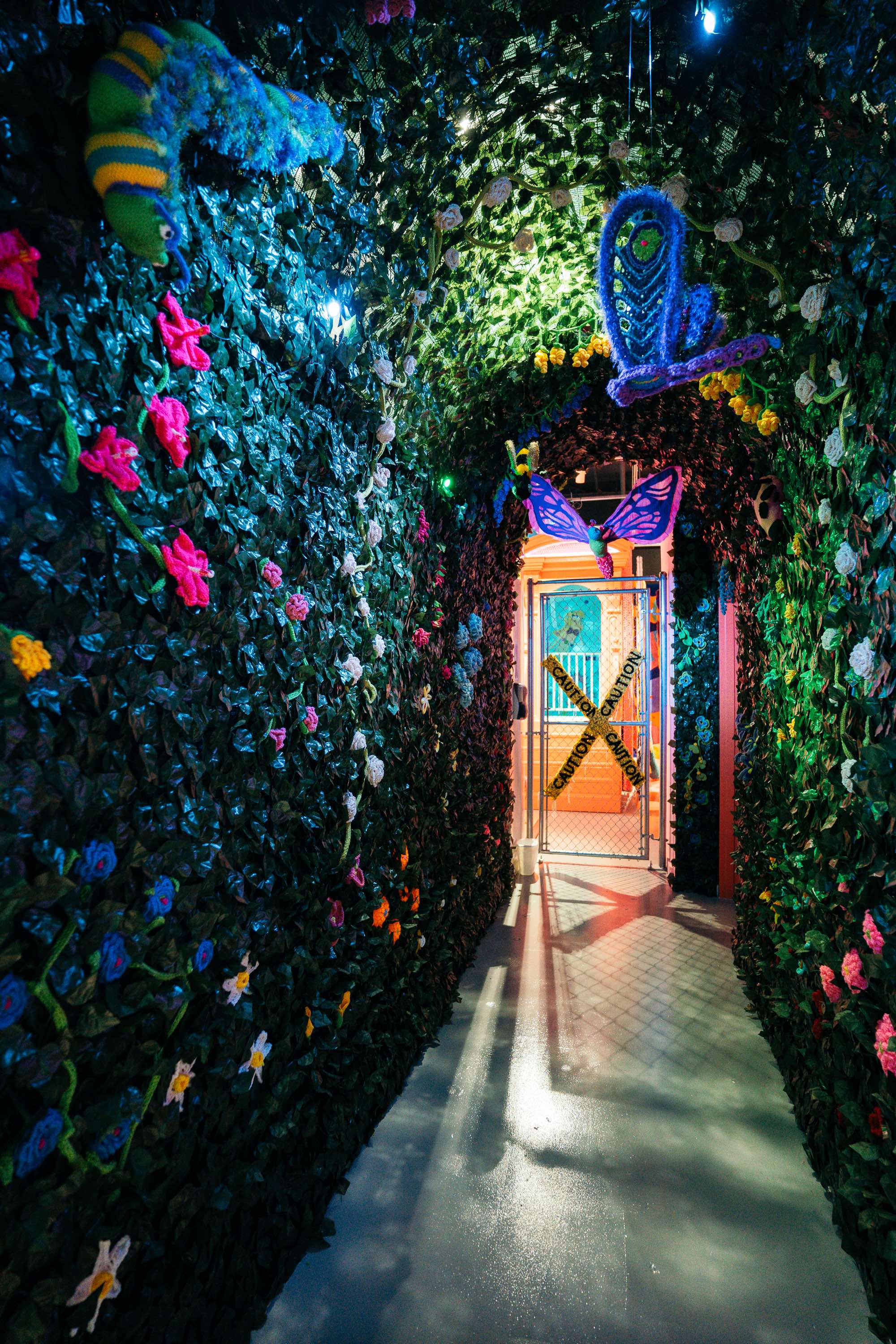 Of course, I invited the Dallas Yarn Bombers to join in, and together we made all of the flowers and insects for the project. Each element of the installation is a tiny work of sculptural art from hydrangeas to poppies, daffodils to wisteria. Everything is knitted or crocheted except the butterfly’s wings, which are Nuno felted, a wool roving on silk felting process. 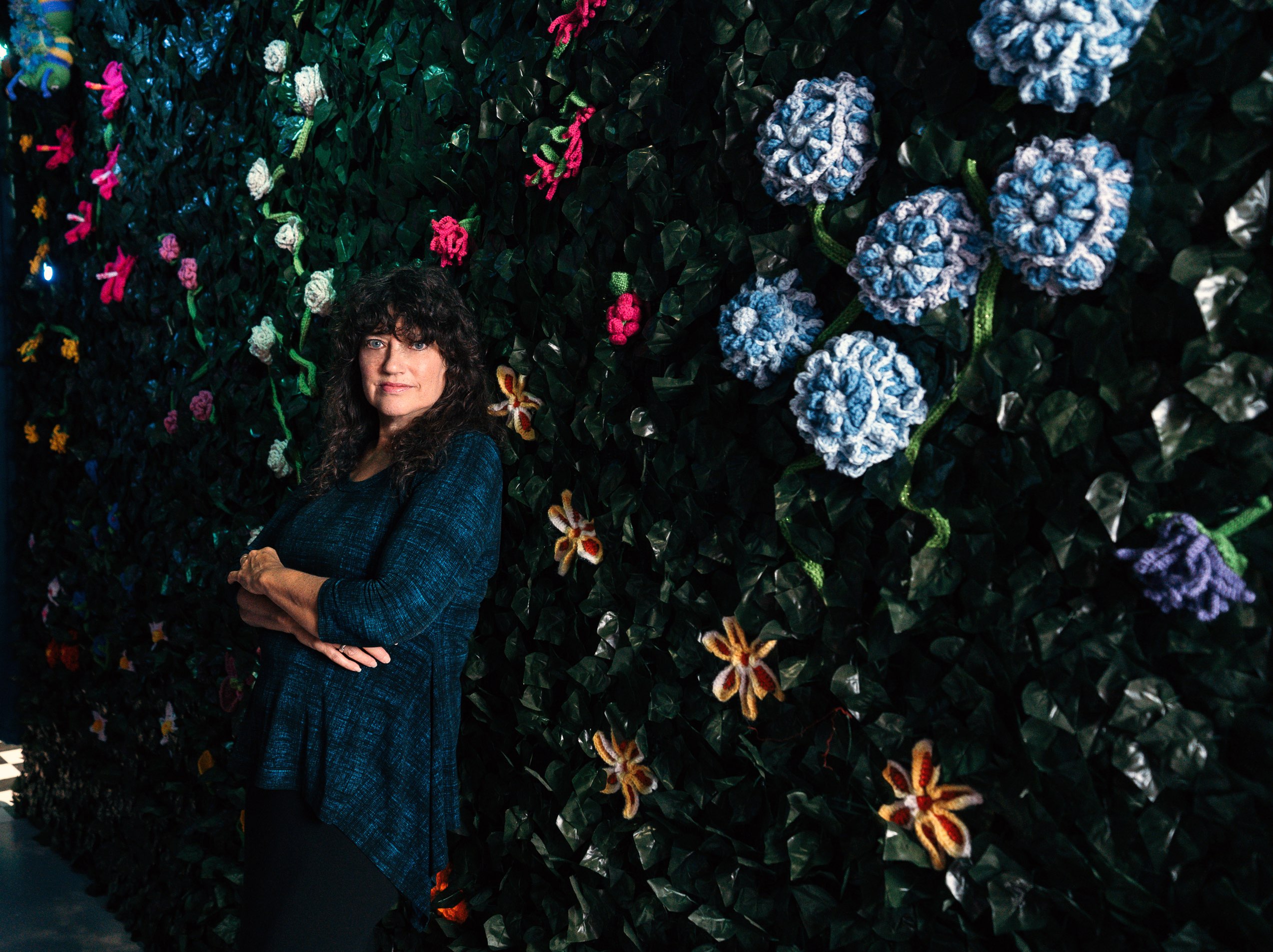 As I worked on installing the pieces, it came naturally to me to work from caterpillar at the entrance to butterfly at the exit. When I found that old tablet, I absolutely knew. "Enchanted Passage" is a metaphor for my personal metamorphosis from caterpillar to butterfly in the new and mysterious world of 'Making Art with Yarn.'

And, it all started with a thought. 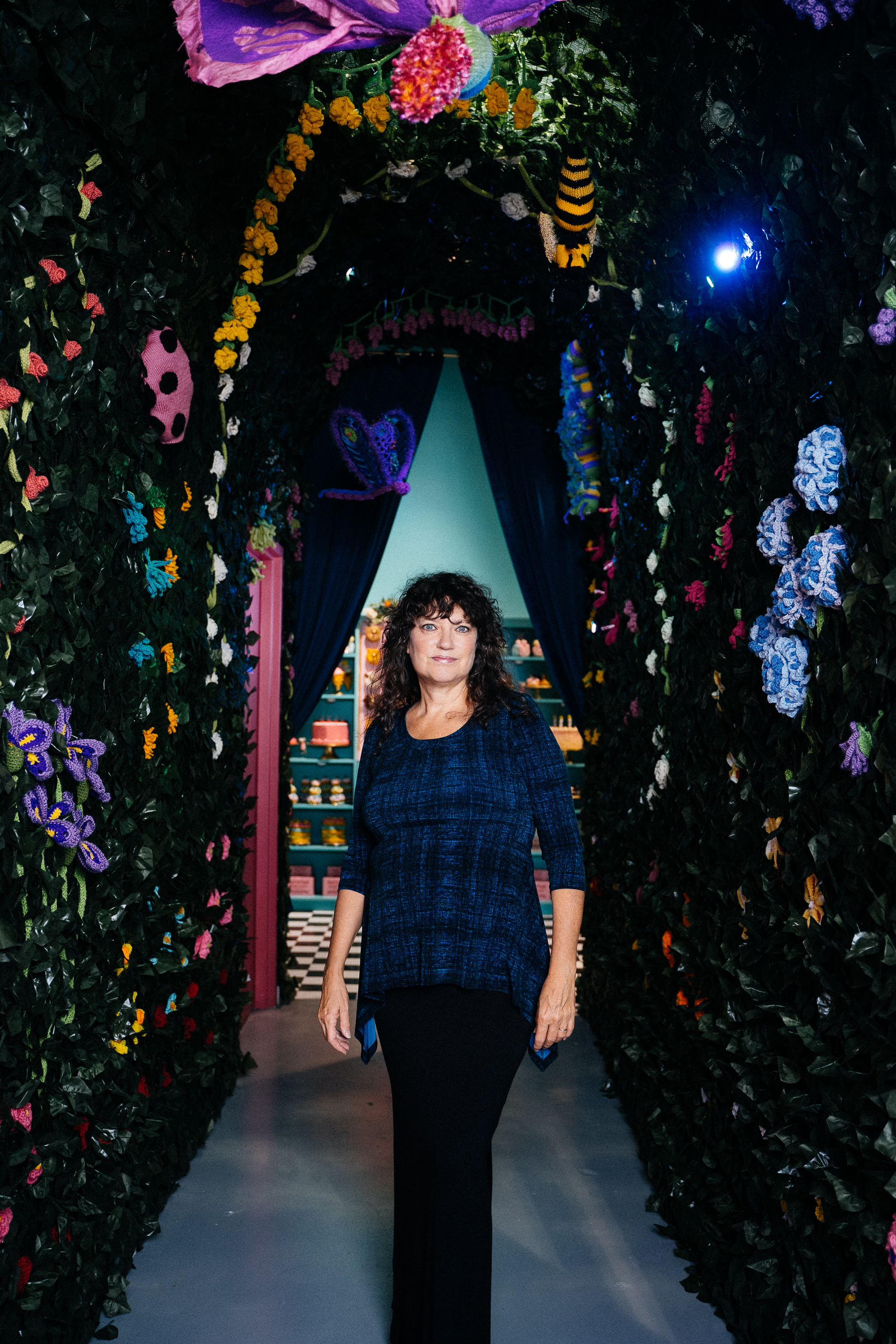